Are you any sex or gender* at all? Then this applies to you.

Sexism does not only apply to women. In fact, women are quite often sexist towards men without necessarily realising. Women have had it tough in past centuries/millennia, but now they are finally grasping at equality, it’s about time we actually paid attention to ‘male sexism’ (the term we’ll use to refer to sexism aimed at men).

Have you ever heard a young boy be told to ‘man up’ for displaying emotion? Or perhaps you’ve heard someone tell a man to ‘grow a pair’? These are just a couple of examples of extremely common male sexism. The issue with statements like this is that it creates an unrealistic expectation for boys and men to live up to. What does it mean to ‘man up’ or be ‘manly’? We’ve accepted this to refer to strength and lack of emotion. It implies that a man is not a man unless he is strong and burly, and that if he shows any emotion then he is not a real man. Women are finally fighting unrealistic expectations placed on them, yet why do we still ignore what society is doing to men? This isn’t to say that the battle fought by women isn’t real, merely that everyone should be aware that everyone has things to face.

An interesting example of the difference between the sexes is the verbs ‘to mother’ and ‘to father’. ‘To mother’ a child generally implies to nurture it and rear it, but ‘to father’ a child implies a mere contribution of DNA towards the creation of a child. Why is it that our language also reflects that it is supposedly inappropriate for men to display emotion or offer care without being seen as weak and unworthy?

There are a few campaigns fighting to raise the awareness of these matters but the first step is to learn more about it yourself. Being aware that nurturing aggression and lack of emotion in boys and young men is what causes some of the behaviour that later leads to sexism towards women which causes fear of violence and rape. It’s not that simple, but you get the idea. If we all finally opened our eyes and allowed fluidity of gender and individual interpretation of what masculinity truly is, we might make life for boys and young men much easier. Making life smoother for anyone is worthwhile, especially when we are already to striving to achieve as much for women who have fought against inequality for centuries and more. Men are capable of emotion, of multitasking, of nurturing children and so much more; it’s about time we realised that men are just people with different bits between their legs, and that this doesn’t impair their ability to behave like kind and caring, fully-functioning human beings.

*To read about the difference between sex and gender, read this article about transsexualism.

Your sex is what you are defined as in terms of your genetics and your biological makeup, for example if you have two X chromosomes, you are of the female sex. Gender, however, is how you identify. For example, you can have an XY chomosome pair (which is the marker for the male sex) but identify as a woman. This is an example of being transgender, trans- simply meaning different. If you are transgender, you identify as a gender different to the sex you were born as. If you identify as the same gender as the sex you were born as, you’re technically cisgender (cis- meaning the same).

Someone who is transgender identifies as a different gender to their birth sex, this is often found in ‘drag’ culture. Whereas someone who is a transexual has had a ‘gender reassignment’ so that they outwardly appear to be of the opposite sex in a biological way. For example, someone who is a transexual* may have had surgery and hormone therapy so that they feel they can live as the opposite sex, the sex they felt they should’ve been born as. The term ‘transvestite’ is pretty much transgender and is fairly outdated by ever-changing, modern-day standards.

LGBT (or LGBTQ) standards for Lesbian, Gay, Bisexual and Transgender (Q = community). Although being transgender or transexual is not sexuality, it is to do with gender identity. Many people received prejudice and discrimination over the expression of their gender and sexual preferences; the first step to fighting this is through awareness. Being transgender is the feeling that your mind is of the opposite sex to your body (in gender-binary terms**), simple as. 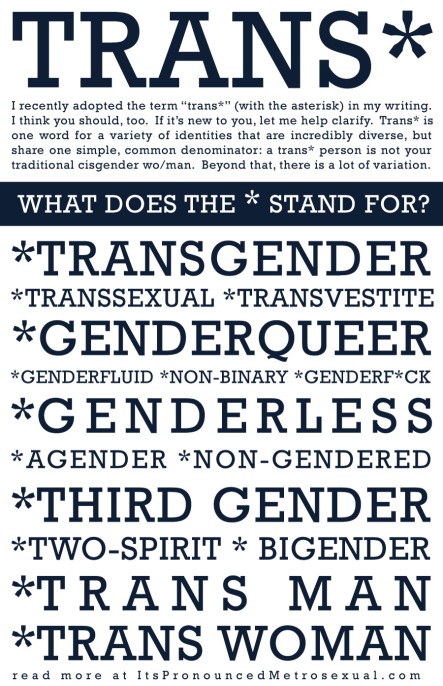 *’Transexual’ is the word often used but the technical term using rules of the English language is transsexual with two Ss, but this is actually quite trivial.

In the same way we might accept an insisted offer of cup of tea when we don’t really fancy one, many people have sex even when they don’t want to. Whatever the reasons why, it needs to stop. For this to happen, we need to get down and dirty with the C-word: Consent.
Dr Doe makes handfuls of excellent points in this short video about consent in sex. 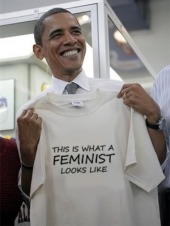 But, wait, there is an answer. Feminism is women seeking equality. So does this mean feminism is just the concept of being against sexism? If so, why is it called feminism? Why is it fem- if it’s equality for all?

Women have their own movement for equality because that’s how bad we’ve had it. Before you call me a ball-breaker, or a feminazi, or some other pointless and actually quite irrelevant name, just think about it.

Have you heard of anti-Semitism? Anti Semitism is prejudice and discrimination again people of the Jewish faith; racism against Jews. How come Jewish people get their own special word? Let me answer that for you; have you heard of the holocaust? Where one of the oldest religions in the world was penalised because… well, because they were different.

Feminism is kind of like that; it has it’s own name because the female people have been discriminated against for so long, with little relevant reasoning as to why. Each wave of feminism has brought about action for something different. In the early 20th century in Britain, it was the fight for suffrage – the right to vote – and we won! Looking back now, there was no true reason as to why women were any less able to vote in a well-informed manner like their male counterpart. I’m not saying all women are highly intelligent, some are pretty idiotic, but so are some men. So surely we can conclude that some of all sexes (and some of those who don’t adhere to gender-binary standards) are foolish. Everyone is stupid, regardless of what’s in your pants.

Yet, the female comedian, Jenny Collier, was recently pushed out of a line up because there were already “too many women on the bill”. Now, I have the sneaking suspicion that her email didn’t come from a concerned individual worried about men’s rights, but rather from an unfortunate soul who clearly didn’t think through what he was doing when he sent an email likely to cause uproar from all right-minded people. How can someone get away with something so obviously sexist? Some people say that female comedians just “aren’t as funny as men”; but that isn’t even what’s being questioned here. It’s agreed that Jenny Collier is funny, so why is she being brushed off? If she wasn’t funny enough, not a good enough comedian, then that might be fair reasoning; cancelled an act because they aren’t what you want in terms or their skills – fair enough. However, cancelling an act because their 23rd chromosomal pair is ‘all wrong’.

It’s true that in some professions, men suffer discrimination. In jobs like teaching or nursing, any man who enters the career “isn’t a real man”. It’s a problem, but that is a whole separate issue that would require and whole separate post. Men can suffer discrimination due to their sex, but how often does it happen? More often than not, women are judged purely based on the fact that they are women. Even women who were born women and underwent gender reassignment will suffer the same oppressive behaviour towards them.

It is time that people realised that women are subjects, not objects; active, not passive. Even women can be sexist towards women without realising. A woman and a man are just people. Once we learn to view people as people, we can progress. Men may love women, but so can women, and men can love men! More than ever, gender and sexuality has become fluid and broad, so how come something as archaic as sexism is still lingering like a bad smell?

Feminism means equality for women. I personally think that we should use a different word, a word for equality for all genders, an inclusive word that is neither feminine nor masculine. I can only hope that if there were a non-specific word, then people would stop judging this book by its cover and start understanding the cause of the friction. Feminists are not crazed women, controlled by their wombs. Feminists are fighters for equality, womb or not.

However, it’s a fact of life that some people have sex. You don’t have to agree with how they do it, who they do it with, why they do it, or anything else. It is VITALLY important that young people who are sexually active, are safe when doing so. Although some sexually transmitted diseases (STDs) are easily treatable, some can cause infertility or even prove to be fatal. Scary, right?

I won’t quiz you about the symptoms of chlamydia or the treatment for gonorrhea, I will merely stress the importance of safe sex.

Safe sex does NOT refer to whether you like to be a bit kinky, that is entirely up to you and your partner, it simply refers to using contraception so prevent infection or unplanned pregnancy. Obviously pregnancy isn’t so much of a problem for gay couples, but infection is just as possible!

It is ridiculously easy to get contraception in Britain. If you are under the age of 25, contraception is available totally free on the NHS! It is available to people of many ages – you don’t have to be 16 (the age of consent in the UK) to access this service. You can access free contraception confidentially from as young as 14 (this isn’t to say that underage sex is encouraged, you just ought to be safe when doing it).

To access free contraception on the NHS, simply search online for your nearest sexual health clinic (which may be within your school or college). Free contraception is also available in forms of samples from some ‘adult’ websites such as http://condomdeal.co.uk/ (10 free condoms, £1.95 postage) and http://www.keepitwrapped.co.uk/ (3 free Durex condoms). These are just a few recommendations on ways to avoid any boo-boos like infections or surprise babies.

One excellent source of information and knowledge on all things sex is the YouTube channel of Laci Green, host of Sex+. Click here to visit her channel.

Moral of the story: if you want to have sex, that’s cool, just stay safe.

(Note: if you don’t understand the title, have a search online as to the meaning of ‘four letter words’, they’re perhaps even less taboo than sex.)